On the 10th of February 1997 South Dublin County Council passed a resolution to lease 12.18 acres at Whitestown Way to Shamrock Rovers for the construction of a new Stadium to replace their former home, Glenmalure Park in Milltown which they had left almost 10 years previously. Planning permission was granted in March 2000 but it would 9 years before they would play their first game at the Tallaght Stadium.

Work commenced in October 2000 but ceased in November 2001 with the pitch and drainage laid, the main stand almost complete and other buildings in various states of completion. Following a long period where no work was carried out, and a refusal by the Planning Authority in December 2004 to extend the lease, the Council terminated the lease on 4 January 2004.

There then followed a long and protracted legal row around the usage of the stadium which was eventually resolved by Judicial Review on the 14th December 2007 and building commenced on the stadium on 6 May 2008, six and a half years after work had first stopped. 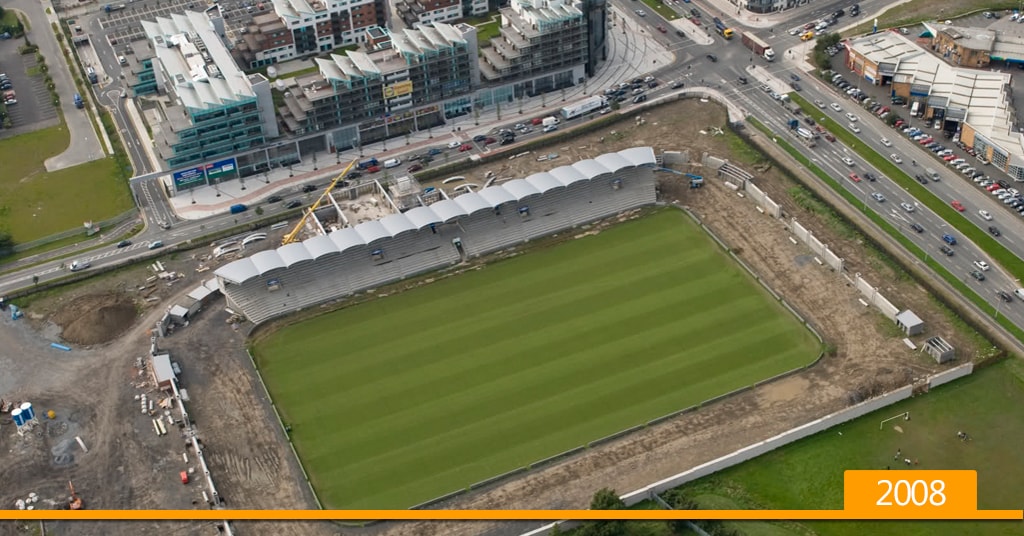 The first game in the new stadium took place on 13 March 2009 and in front of 3,000 fans Rovers made a winning start to life in Tallaght as they beat Sligo Rovers 2-1. It was ironic because Sligo had been the opposition in the last game Rovers had played at their previous home. Scot Gary Twigg entered the history books as the first man to score at the new stadium. 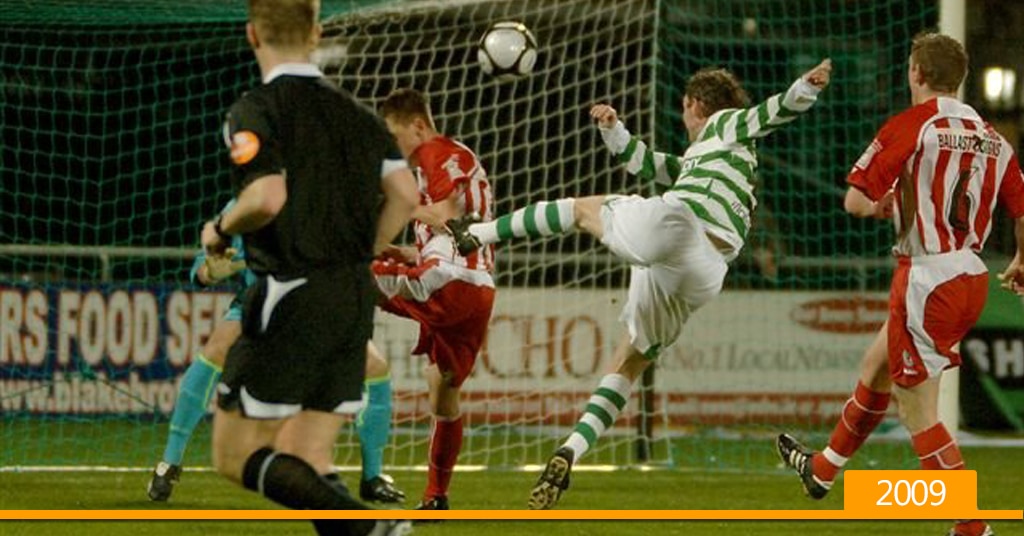 On 20 July 2009, Shamrock Rovers and SDCC welcomed Real Madrid to Tallaght Stadium as part of a “festival of football” which also included games against Newcastle United F.C. and Hibernian F.C. Thanks to the addition of temporary seating 10,900 fans were present on the night as Cristiano Ronaldo made his debut for Real Madrid. 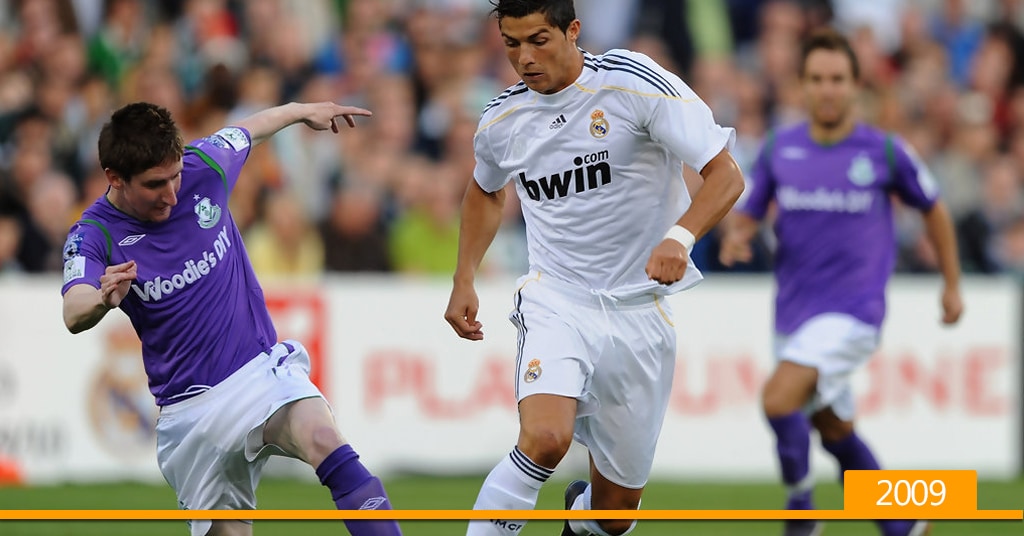 The second (east) stand was opened on August 22, 2009 and Dundalk FC were the visitors and for a game watched by over 4,500 fans. The first full house with the new capacity came against Bohemian FC on October 2, 2009, when 6,000 fans packed the stadium for the Dublin Derby.

The first International game was held on October 9, 2009 when the Republic of Ireland under-21 national football teamplayed Georgia they game ended in a 1-1 draw. The 2009 FAI Cup Final was held in the Stadium and Sporting Fingal won their first and only honour when they beat Sligo Rovers before 8,105 people.

The Setanta Sports Cup Final has been held on three occasions at Tallaght Stadium, in 2010, 2011 and the 2013. In this years final Shamrock Rovers defeated Drogheda United 7-1.

The first European game in the stadium was held in July 2010 when Rovers welcomed Bnei Yehuda Tel Aviv F.C. from Israel in the Europa League. After Rovers knocked the Israelis out over two legs the next round draw saw Juventus F.C.play at the stadium in front of a capacity crowd. 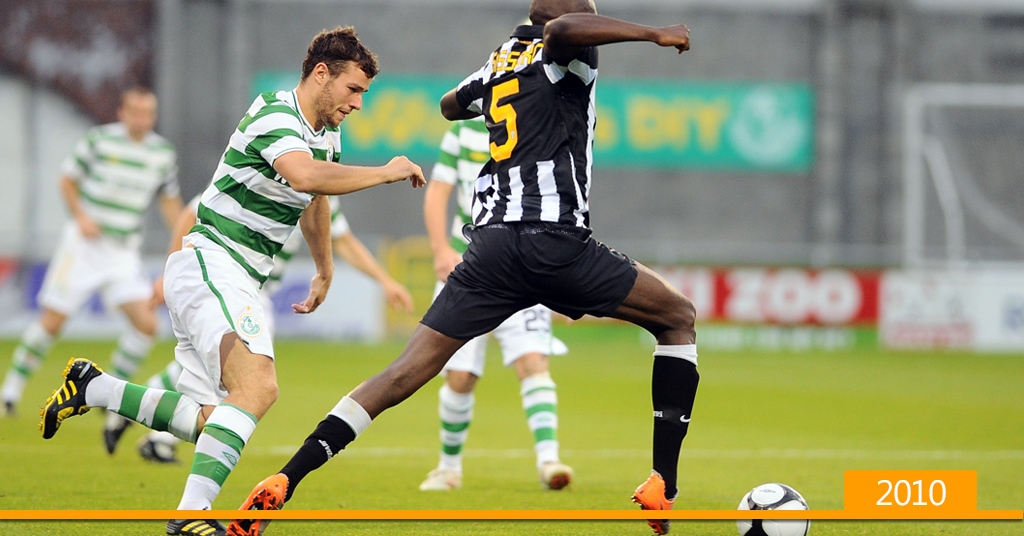 In order to comply with UEFA participation rules in the group stages of the Europa League a temporary south stand was constructed. Although only a temporary structure the new stand was passed fit by UEFA inspectors as fulfilling the criteria for permanent seating. The inclusion of the new south stand brought the stadium capacity above the minimum of 8,500 seats needed to be classified as a Category 4 Stadium as laid out in the UEFA Stadium Infrastructure Regulations. Thus allowing Shamrock Rovers to play their group stages games in the Stadium.

Due to seating restrictions at Richmond Park, and United Park both St Patrick’s Athletic and Drogheda United have played home games in the Stadium.

The stadium has also hosted other sports apart from football. In November 2009 the first international rugby match took place there as the Ireland A team defeated Argentina A 31-0. The Leinster Rugby team played one of their pre season friendlies at the venue in August 2012 against English side Gloucester and in 2013 history was made when the first Leinster Schools Rugby Senior Cup match took place in Tallaght as Roscrea beat Terenure in an epic Quarter Final. 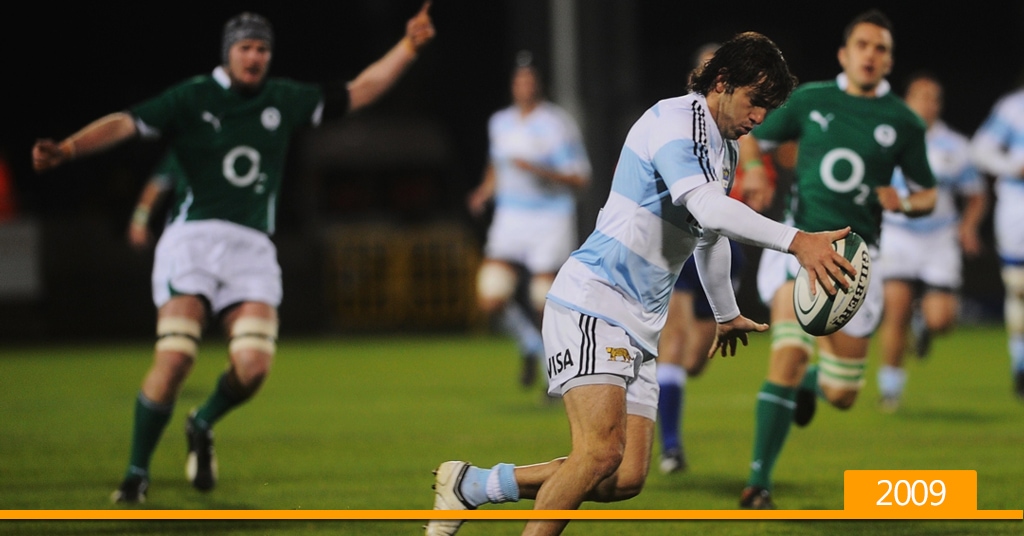 In July 2010 it was the Euronations Archery Tournament which provided one of the highlights of Tallaght’s sporting year as the very best competitors from all over Europe came to the stadium to battle it out for the top prize in this prestigious tournament.

In August 2013 Tallaght Stadium was proud to host it’s first American Football match when Canadian team, the Greendell Falcons played the Bristol Academy Pride from the European US High School league in The Gathering Bowl.